LWL-Museum für Kunst und Kultur has reopened with a major survey of British art. The museum’s first major exhibition, following the unveiling of the new museum building, is devoted to figurative painting in London from the 1950s to the late 1970s, including works by Francis Bacon, Lucian Freud, Frank Auerbach, Leon Kossoff, David Hockney and Richard Hamilton.

Over 100 works by fifteen artists are on display, highlighting the artistic dialogue which took place in London over three decades beginning in the 1950s. Although this group of artists is of international stature, many names will be unfamiliar to a German audience, as will their determination to capture the life around them which seemed, in the aftermath of the war, both precarious and thrilling. Displayed in the museum’s new suite of grand exhibition galleries, the exhibition draws on work from these artists’ earliest years in London’s art schools to mature works which continue to influence the artists of today.

The daring and powerful approaches to painting employed by these British artists, unmatched in any other country, were grounded in a commitment to the medium and to the challenge of painting appearances and to focusing on subject matter closely connected to their obsessive interests. Their procedures ranged from the methodical analysis of observed reality to a very inventive engagement with photography and the cinematic image. A few artists, such as Richard Hamilton and Euan Uglow, applied the paint sparingly and with precision, others, such as Francis Bacon and Leon Kossoff, engaged in almost convulsive, expressive gestures as they sought to convey a tangible experience on a flat surface.

Despite their various techniques and subject matter, all were dedicated to making a fresh contribution to the tradition of figurative art and used as references paintings hanging in the National Gallery, London. The exhibition challenges the accepted view that American Abstract Expressionism was the principal vanguard movement in painting and presents works that are very much of their time, alive to the attractions of mass culture and the changes in social behaviour in the 60s, yet, made with such authority and nerve that they seem surprisingly relevant today. 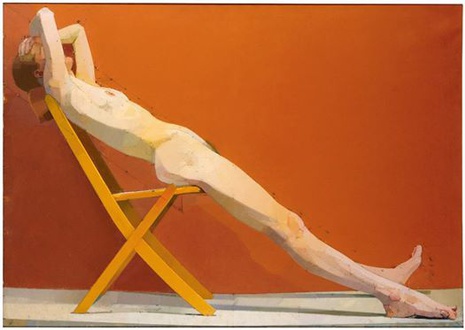