'A richer coda is on offer in Mayfair at Offer Waterman, which brings together an exceptional selection of transfer drawings from 1958-69, made by dissolving newspaper photos and text with a solvent, then rubbing them on to paper with pencil or pen, sometimes adding gouache and watercolour. Mass-produced imagery is seamlessly combined with the handmade intimacy of drawing, and political themes evoked.

With images from Listerine mouthwash to a radar station, "Orange Body" features examples of 1960s Americana at microscopic and cosmic scales, arranged to surround the caption "Deadlines Scrapped over Desegregation" amid rushing helmeted heroes: baseball players, astronauts. "Headline", first owned by Andy Warhol, is a blur of politicians' faces, the pro-slavery Confederate flag and car licence plates from Mississippi all revolving round a still square of calm with a reproduction of Vermeer's "Girl with a Pearl Earring".

These careful, thoughtful collages of protest extend our understanding of the most private group of works on display at Tate, the 34 illustrations to Dante's "Inferno" created by the same transfer method. Here, on surfaces luscious, smoky, scratchy, flickering, Dante is a shorts-clad athlete from Sports Illustrated among wrestlers and weightlifters, his celestial messengers are astronauts, demons are the riot police, and handless clocks symbolise eternity. All these unfold through fragile, fugitive veils - "Inferno" is Rauschenberg's most homoerotic work - musing on pain, conflict and suffering in an ancient narrative with which Rauschenberg nevertheless achieves his life-long aim: "to ennoble the ordinary".' 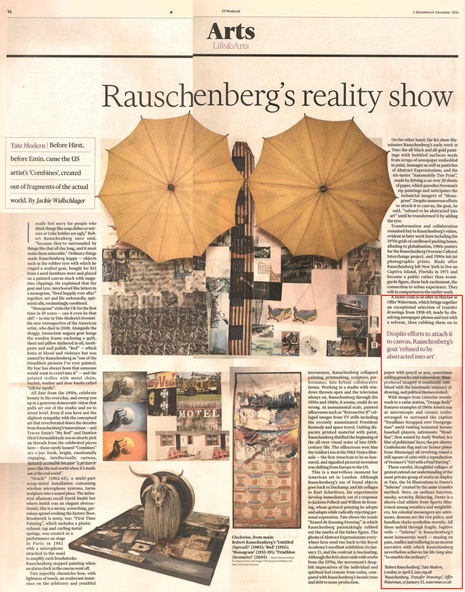