Our exhibition is 'Critics' Choice' in this week's Financial Times, (Life and Arts section).

"What in your opinion is the most important development in British painting since the war?" Auerbach was asked in 1961. "I cannot answer," he replied; the question seemed "impertinent to my situation. I think of painting as something that happens to a man working in a room, alone with his actions, his ideas, and perhaps his model. He is affected by his circumstances, and by the standards and events of his time, but he seems to me to be the sole coherent unit."

These words, which were unconventional even in the 1960s, are out of kilter with today's art-world circus. Indisputably, though, Auerbach is among the most important figures in postwar painting, and this exhibition of his portraits of 1954-1978, borrowed from private collections, shows why. The works are electrifying, because they record intense emotional and intellectual encounters between artist and model: physical appearance is transformed by concentrating looking, perception and memory into an abstracted raw visual manifestation, where scarred, erased, flurried, built-up surfaces evoke the essence of a human presence.

Auerbach's heads and figures emerge from enveloping darkness as if, wrested from chaos, on the verge of disintegration, they struggle simply to exist. They place Auerbach at the heart of the European existentialist tradition, alongside Giacometti and Bacon. Like them, he restricted himself to a few deeply familiar models, and is a more autobiographical artist than is commonly realised.

Portraits of artist Leon Kossoff and curator Catherine Lampert are intensely characterised depictions of the mind at work; in those of Juliet Yardley Mills ("J.Y.M."), fluid, linear, agitated painterly handling echoes this favourite model's long, sinuous form. The show traces portrayals of Auerbach's lover Estella Olivia West ("E.O.W.") over two decades, from a sensuous figure reclining on her eiderdown to the final shockingly compressed, tense, angular profile head, pared down in white and blue, when she was approaching 60 and Auerbach ended their relationship. 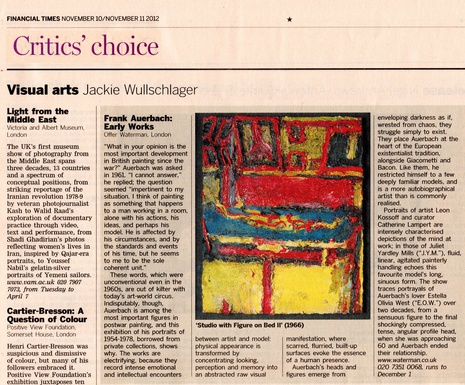