It’s often been mentioned that Robert Rauschenberg always kept a window open in his New York drawing room in order, as he put it, “to let life in”. His work, as anyone who has visited the current retrospective at Tate Modern will attest, is crammed full of everyday found objects. He’s probably best known for his three-dimensional sculptures he named “combines” in which he included umbrellas, socks, buckets, paint cans, newspaper headlines and tyres to name but a few, an example of the last famously encircling the body of a stuffed goat.

Rauschenberg re-drew the parameters for what an art work could comprise, inspiring along with such as Jasper Johns and Andy Warhol, the pop-art movement that developed from the late 1950s. After his combines phase, he was looking at ways of using the same techniques for “ennobling” everyday ephemera but in a quicker, more accessible two-dimensional form. He discovered that by applying lighter fluid to a magazine clipping and rubbing the back of it with a dry nib pen, he could transfer the image onto another drawing sheet. This results, as with Umpire from 1965 (above) in the images being seen in reverse. In this case, he has then painted over sections.

Some 26 of these transfer drawings are currently on show at the Offer Waterman Gallery in London’s Mayfair, almost half of them for sale. The exhibition is the first in the UK devoted to this particular aspect of his work created between 1958 - 1969. Unlike Rauschenberg’s interpretations of Danté’s Inferno, the series of transfer drawings in the Tate Modern show, these are less compressed leaving him more space to play with ideas and images reinterpreted from the US mass media.

According to curator, Polly Checker, the transfer concept is interesting because Rauschenberg plays with the idea of the artist’s hand. “It’s a drawing process that’s once removed. The hand is there because it’s a very visceral process but actually it’s mechanical to an extent and then he’ll paint over them afterwards. That’s interesting because it’s playing with that relationship of who’s actually producing something.” ... 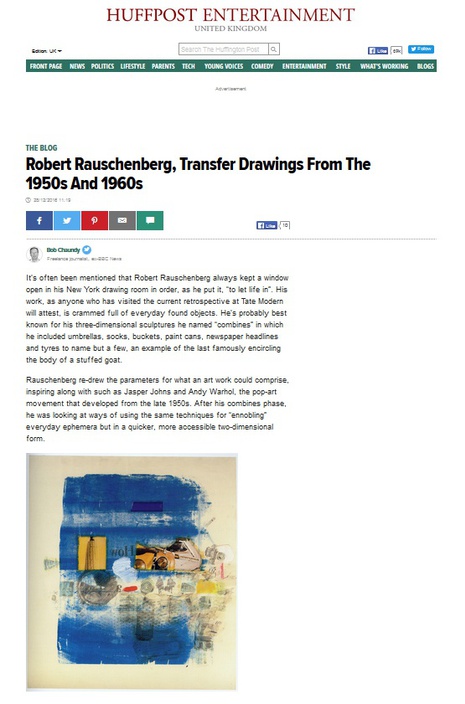